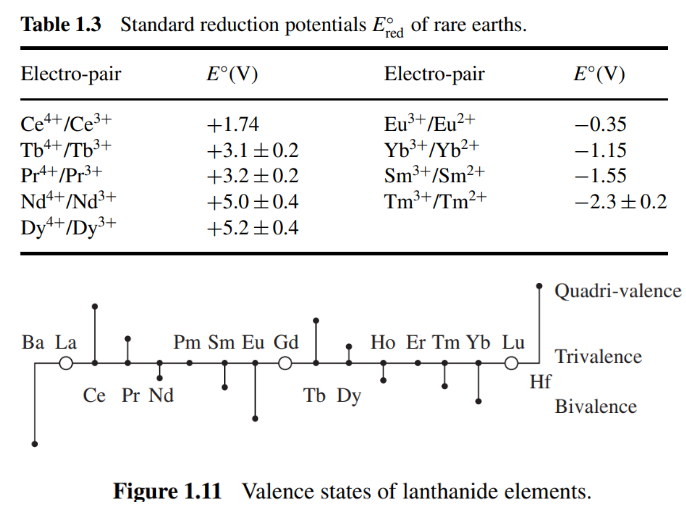 Rare earth elements have similar configurations in the two outermost shells. They exhibit typical metallic properties in chemical reactions. They tend to lose three electrons and exhibit a \(3+\) valence state. From the Periodic Table of the elements, rare earth elements are classed as less reactive than alkali metals and alkaline earth metals but more reactive than other metals. They should be stored in an inert liquid otherwise they will be oxidized and lose their metal luster. The metal reactivity increases gradually from scandium to lanthanum and decreases gradually from lanthanum to lutetium. That is to say, lanthanum is the most reactive metal of the 17 rare earth elements. Rare earth metals can react with water and release hydrogen. They react more vigorously with acids but do not react with bases. 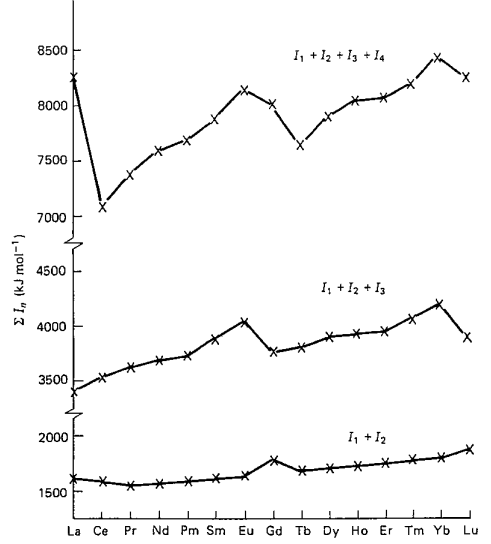 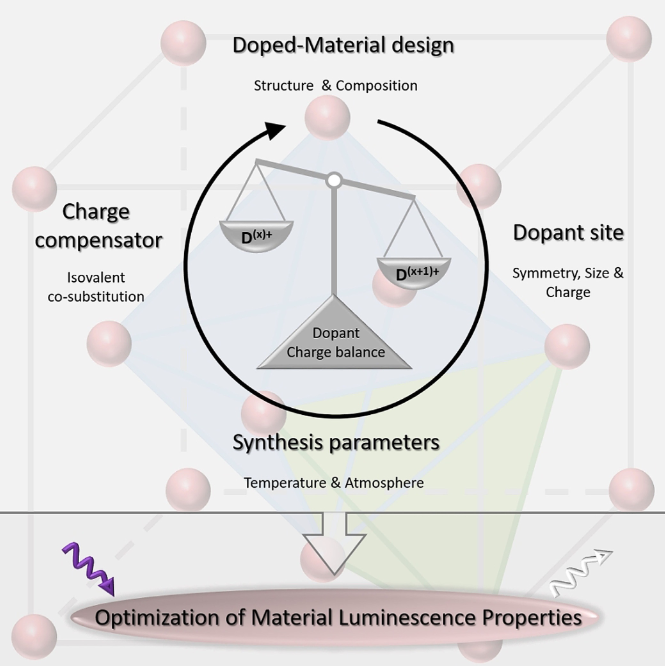 上图来自[Tuning the oxidation states of dopants: a strategy for the modulation of material photoluminescence properties-Chemistry–A European Journal, 2021]

For multivalent dopants (e.g. Ce, Eu or Mn) a reduction is also often required. For cerium this step clearly aims at stabilizing the luminescent Ce3+ instead of the commonly non-luminescent Ce4+. Even though, the possible coexistence of the two oxidations states of the dopant is not much considered, and a single oxidation state of the activator only is often expected to be stabilized. However, even under severe reducing conditions, a mixed valence may exist. 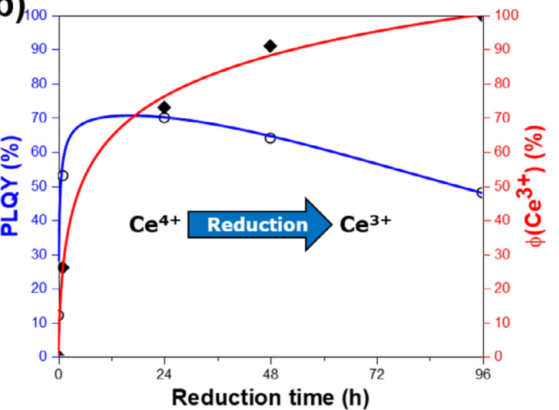 我的描述：In general, to obtain Eu2+-activated luminescent materials, a reduction-atmosphere of H2, H2/N2, or CO is always required because of the necessary reduction process of Eu3+ → Eu2+. However, in some unique compounds, like phosphate Ba3(PO4)2, borate SrB4O7, silicate BaMgSiO4 and aluminate Sr4Al14O25, it was found that the self-reduction of Eu3+ to Eu2+ could occur in an air or O2 atmosphere at high temperatures. This anomalous self-reduction phenomenon can be partially ascribed to the rigid three-dimensional (3D) structures, with tetrahedral anion groups such as BO4, SiO4, AlO4, or PO4.

Four conditions that seem to be necessary for the reduction Eu3+→ Eu2+ in solid state compounds when prepared in air at high temperature. 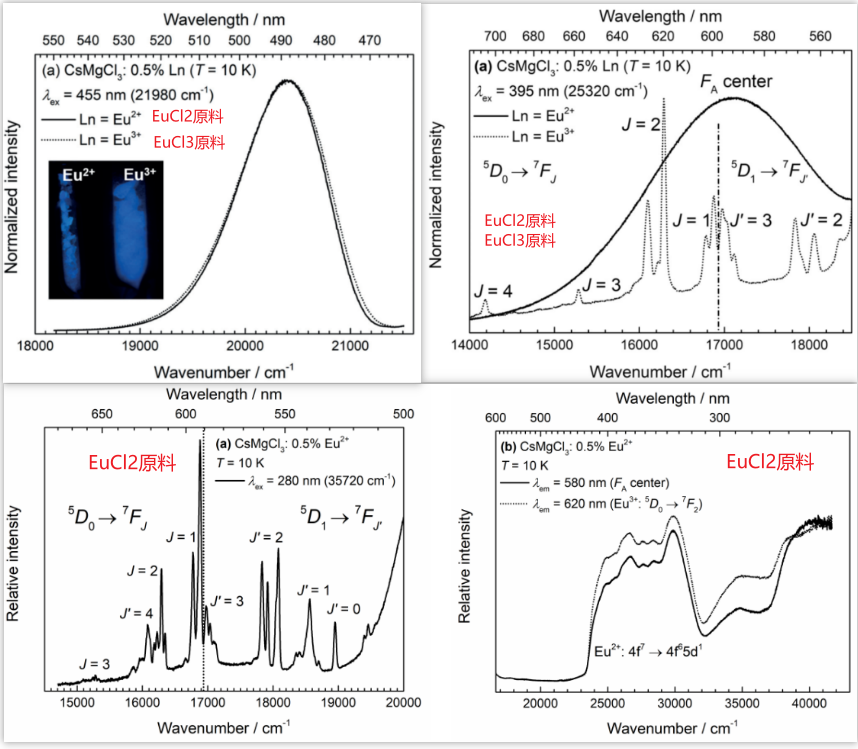 (1) Eu原料
stabilization of Eu2+ could be improved when the doping was executed using EuF2 or EuS in the reacting mixture of oxides. 这句话来自[JAC-Eugeniusz Zych-2020] 比如[M.Nikl-JPCC-2016]用的就是EuS、EuF2。[Underestimated Color Centers: Defects as Useful Reducing Agents in Lanthanide-Activated Luminescent Materials-Angew-2020] 也用了EuCl2。

(3) 气氛-CO
By adding fluxes and sintering in a CO reducing atmosphere, the IQE is greatly enhanced to 92.3%. 之前别人报道的相同基质掺杂Cr3+效率不高是因为Cr3+ luminescence suffered from impurities and oxidation of Cr4+ when the material was sintered in air.
[Strategies to approach high performance in Cr3+-doped phosphors for high-power NIR-LED light sources] 之前研究的固相法烧制的Cr3+多集中在含Ga/Ge的基质，这些元素在还原性气氛下容易挥发，不能形成纯相。
我：注意气氛既可以是烧制过程中用还原性气氛，也可以是air中烧制好后，在还原气氛下post-treatment。

(4) 各种气氛-概述
One valence state of dopant can be preferentially stabilized at the expense of the other according to the partial pressure of oxygen. Thus a highly oxidative atmosphere such as O2 or air, will favor the stabilization of the oxidized form of dopant. On the contrary, with the use of a reductive atmosphere such as CO or H2, the reduced form of dopant will be predominantly stabilized. This has been demonstrated for example through the study of cerium-doped materials.

Thus, under oxidative atmosphere (in air), oxidation of Ce3+ ions into Ce4+ is favored, which leads to the decrease of the luminescence intensity. In reductive atmosphere (CO), the ratio Ce3+/Ce4+ increases, improving the luminescence intensity. In N2 atmosphere,the material is isolated from any oxidative or reducing sources. Thus, an intermediate emission intensity corresponding to a limited stabilization of Ce3+ ions is observed.The charge balance is preserved owing to the formation (respectively filling) of oxygen vacancies in reducing (respectively oxidative) atmosphere. The study of Ce4+/Ce3+ doped materialsillustra tes the possibility of tuning the ratio of the dopant valence state according to synthesis conditions, which can be generalized to most of thedopants.
[Tuning the oxidation states of dopants: a strategy for the modulation of material photoluminescence properties-Chemistry–A European Journal, 2021]

Controlled reduction of dopant can also be performed using oxygen getter such as hydrides (e.g. CaH2, NaH, LiH) as reducing agent. This method can be implemented after material synthesis if the dopants are the only reducible elements in the material. It consists in the thermally activated disinsertion of oxygen from the crystal structure of the phosphor. Disinserted oxygen can then react with the getter to form thermodynamically stable oxides. Consequently, the dopants are reduced to keep the charge balance. Since this process is temperature and time dependent, it is possible to accurately control the valence states of dopants as it has been demonstrated by Behrh etal. through the investigation of SrAl2O4:Eu phosphor. The reduction of Eu3+ ions into Eu2+ is performed with CaH2 as oxygen getter. With the increase of reduction temperature, the Eu2+ emission intensity increases at the expense of Eu3+ emission intensity.
[A Chemical Route Towards Single-Phase Materials with Controllable Photoluminescence-Angew-2015] [Tuning the oxidation states of dopants: a strategy for the modulation of material photoluminescence properties-Chemistry–A European Journal, 2021]

laser beam: Comparison among the spectra revealed the presence of the single trivalent state of Tb in the YAG laser-sintered ceramics. These results agree with those previously reported that suggested laser sintering in air can create a reducing environment at high temperature and this causes the release of oxygen, creating oxygen vacancies inside the sample. This oxygen deficiency associated with the high cooling rate promote the stabilization of the lower chemical state of rare earthss, including Eu2+ and Ce3+, and transition metals, Ti3+, even when the samples were sintered in air. Therefore, during the sample cooling down, the re-oxidation is frustrated and just the Tb3+ became stable at room temperature. [Laser sintering and photoluminescence study of Tb-doped yttrium aluminum garnet ceramics]

概述：In order to prevent defect formation, charge compensators can also be inserted inside the material. This strategy is widely investigated for preferential stabilization of one oxidationstate of dopant, leading to the enhancement of luminescence properties. Li+, Na+, and K+ are among the most widely used monovalent charge compensator sbut other multivalent charge compensators such as Mg2+, Si4+ or Ge4+ ions have alsobeen investigated.
[Tuning the oxidation states of dopants: a strategy for the modulation of material photoluminescence properties-Chemistry–A European Journal, 2021] 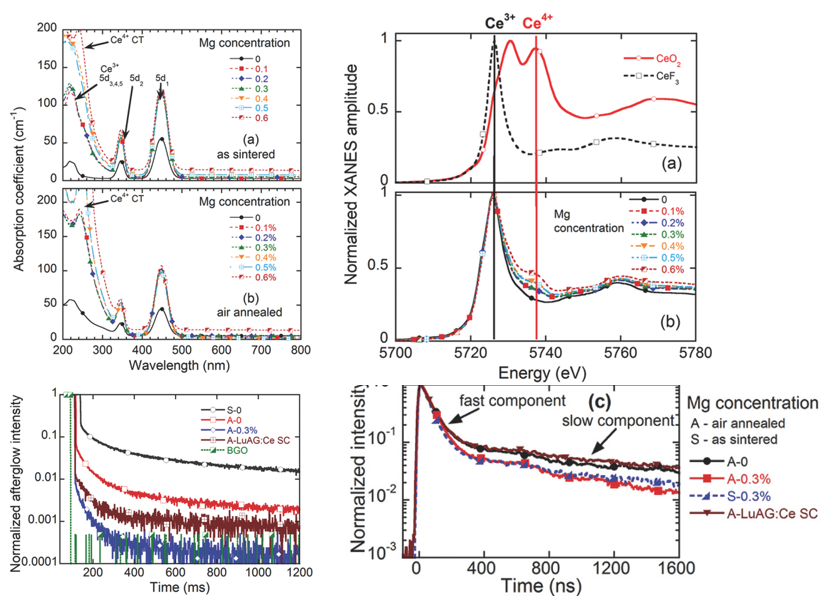 Lu3Al5O12:Ce,Mg Optical Ceramics Scintillators [AOM-2016]通过共掺杂Mg2+，促进了Ce3+部分地转变为Ce4+。The Ce4+ center, however, does not impair the scintillation performance due to its capability to positively influence the scintillation process. The importance of simultaneous application of such co-doping and annealing treatment is also demonstrated. With 0.3 at% Mg, our ceramics display a light yield of ≈25000 photons/MeV with short 1 μs shaping time, a relative fast component intensity as high as 60%, and very low afterglow.

In Ce3+-doped garnet scintillators, Ce4+ is intentionally added to accelerate the decay and, hence, improve the time response of the radiation detector. [Charge transfer from Eu2+ to trivalent lanthanide co-dopants: Systematic behavior across the series-JCP-2021]

Role of Ce4+ in the Scintillation Mechanism of Codoped Gd3Ga3Al2O12∶Ce

The Carrier Capture and Recombination Processes in Ln3+-Activated Scintillators

Electron transfer between Eu and Tb in complex fluorides

Dorenbos finally indicated that the redox stability of a given oxidation state of a lanthanide ion in an inorganic host should depend on the relative position between the ground state of the incorporated activator within the band gap and the Fermi level of the inorganic host material. [Underestimated Color Centers: Defects as Useful Reducing Agents in Lanthanide-Activated Luminescent Materials-Angew-2020]

费米能级处于禁带中央，基本不随温度变化(简化处理)，近似认为费米能级的位置在低掺杂浓度下不变，在低温热平衡下，EF以下的能级被占据，而EF之上的能级没有被占据。Energy difference between the electron in the Eu2+ ground state and the Fermi energy. $$E_{\mathrm{Ff}} \equiv E^{\mathrm{CT}}-0.54 E^{\mathrm{ex}}$$这里的0.54来源于1.08的一半，\(E^{\mathrm{ex}}\)表示的是the energy needed to excite the host lattice (i.e. the energy to create a bound electron-hole pair (exciton))。 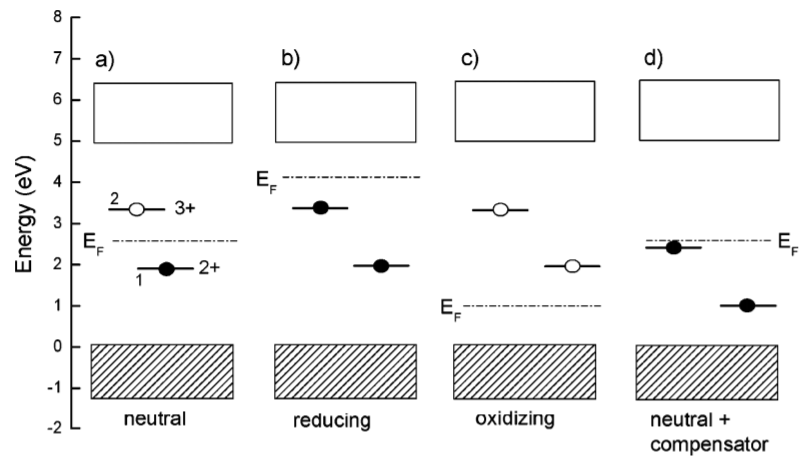 Eu2+掺杂的样品发光很弱。The energy difference between the first 5d state of Eu2+ and the bottom of the CB is 0.1 eV, which is consistent with the weak luminescence of Eu2+ in CaMgSiO4 and an incomplete reduction in Eu3+ in it. The energy difference (EFf) between the 4f ground level of Eu2+ and the Fermi level for CaMgSiO4 is calculated to be 0.95 eV, and this high EFf value may account for the incomplete reduction in Eu2+ in this compound. [Photoluminescence Properties and Valence Stability of Eu in CaMgSiO4-JES-2010]

It is important to note that it is not possible to precisely quantify the ratio of two oxidation states of one dopant using the photoluminescence properties only. Thus, the efficiencies of excitation and emission of activators depend strongly on many parameters including the excitation wavelength (see associated section), or absorption cross-section. Energy and charge transfers can also occur between ions, as well as non-radiative de-excitations (e.g. multiphonon relaxations via lattice vibration), leading to the variation of luminescence properties of emitting centers. Thus, in order to identify and quantify different oxidation states of dopant, several methods can be considered among which Electron Paramagnetic Resonance (EPR), Xray Photoelectron Spectroscopy (XPS), or X-ray Absorption Near Edge Spectroscopy (XANES).
[Tuning the oxidation states of dopants: a strategy for the modulation of material photoluminescence properties-Chemistry–A European Journal, 2021]