常见稀土的发射能级：In practice, however, radiative emission can only be realized from a small number of energy levels characterized by a large gap separating the next lower-lying level. The large energy gap helps preserve the excitation energy against multiphonon relaxation. 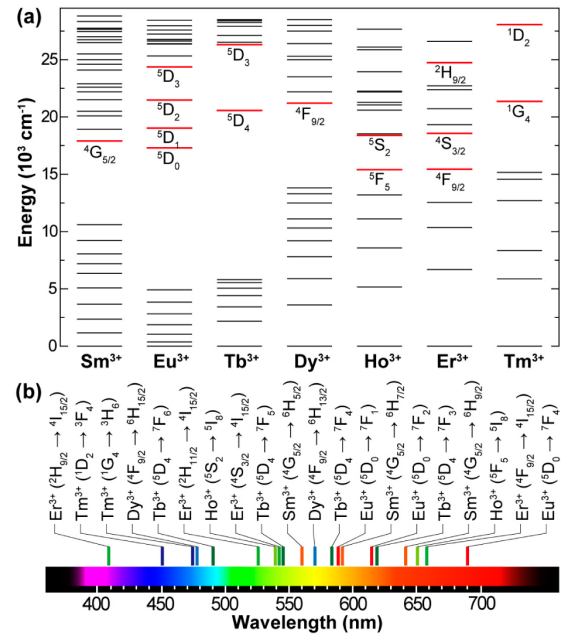 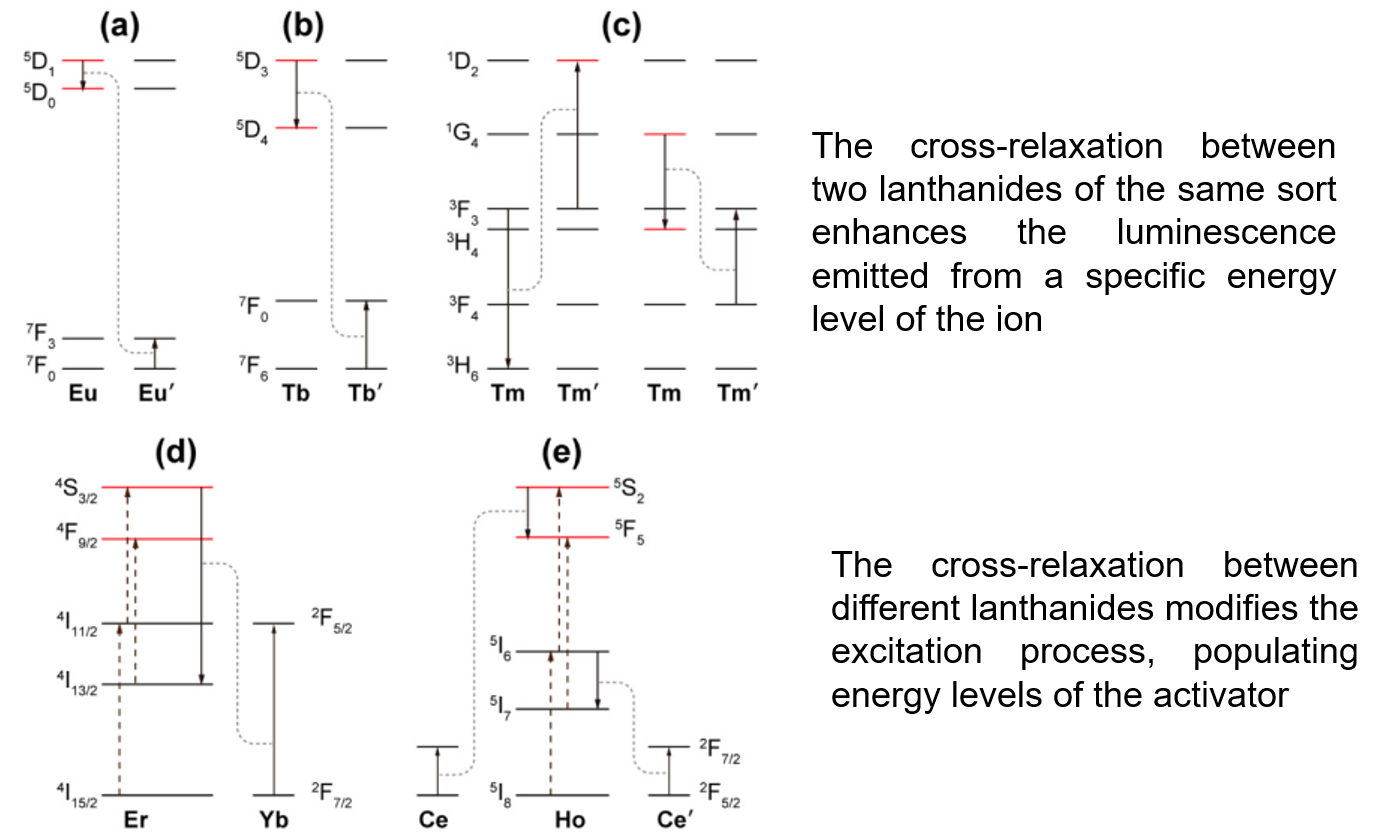 The versatility of the doping approach for fine-tuning emission colors was later confirmed by a number of research groups in a wide variety of host matrices incorporated with activator pairs of Er/Tm, Ho/Tm, and Eu/Tb.
存在的问题：It is worth noting that the activator concentrations should be kept substantially low (<2 mol %) to minimize activator−activator interactions.

不同NaYF4相中Er3+的发光不同：一个发光在660 nm最强，另一个相540 nm最强。It is believed that the phase-dependent emission is attributed to the varied site symmetry of lanthanide dopants in different host lattices. 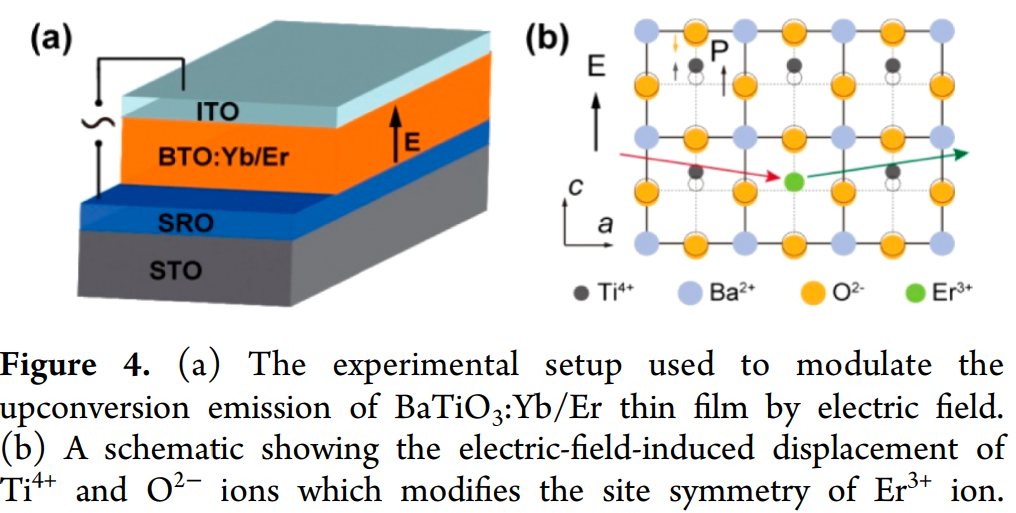 The emission spectrum of Er3+ dopant was dynamically modulated under a sinusoidal alternating current bias, opening up new avenues for potential applications such as electrically controlled upconvertors. On another matter, this approach may enable better understanding of the crystal-field effect on lanthanide luminescence because the site symmetry of the dopants can be systematically modulated in a single host material without the need for chemical composition modification.

The Effect of Particle Size: 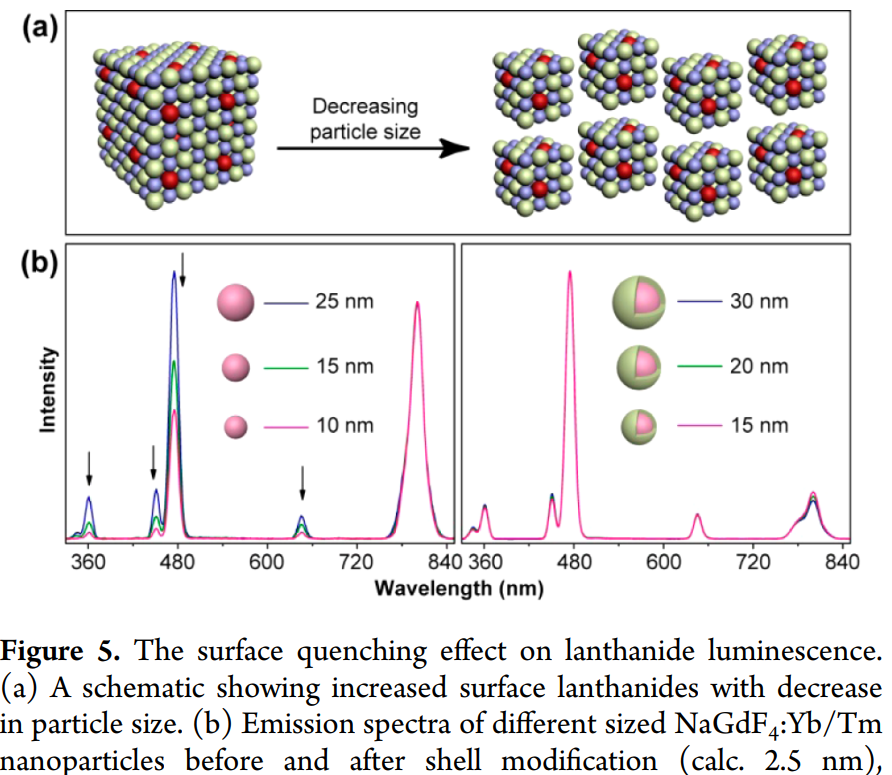 size dependent optical property is most likely attributed to a surface quenching effect rather than the quantum confinement effect, a phenomenon typically observed in quantum dots. As the particle size decreases, the concentration of the surface dopants steadily increases (Figure 5a), leading to the variation in the overall emission spectrum. 另外，尺寸小了会有更严重的surface quenching effect，可以通过thin surface protection layer来解决。

Host−Dopant Energy Transfer: For example, Mn2+ ions in MnF2:Yb/Er and KMnF3:Yb/Er nanoparticles can strongly interact with Er3+ ions to take away the excitation energy of Er3+ in the 4S3/2 state. Subsequent energy transfer from Mn2+ to Er3+ increases the population of Er3+ in its 4F9/2 state, resulting in an enlarged intensity ratio of red-to-green emission.
注：伍博士也做了类似的工作，发现It is found that the higher Mn2+ energy level position will facilitate the output of green UC emission from Er3+.[JMCC-2016] 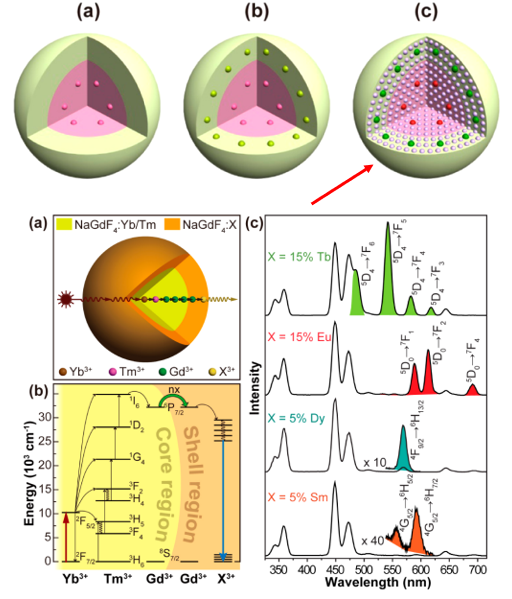 General core−shell strategies for spatial confinement of lanthanide dopants:
(a) The passive-shell coating design with the dopants merely incorporated in the core layer.
(b) The active-shell coating design with different types of lanthanides separately doped in the core and shell layers.
(c) The energy migration core−shell design featuring an optically active sublattice. 上图中Gd sublattice can initiate an energy migration process to bridge energy transfer through the core− shell interface (Figure 7b). This effect enables fine-tuning of upconversion emission for a wide range of lanthanide activators without long-lived intermediary energy states (Figure 7c), which are generally regarded as a prerequisite for photon upconversion.

Assembly of Particle Building Blocks: The assembly of optical nanoparticles of different chemical properties into one composite particle may lead to potentially synergistic optical properties as a result of controlled interplay between the constituent entities. This approach adds an additional dimension to multicolor tuning. 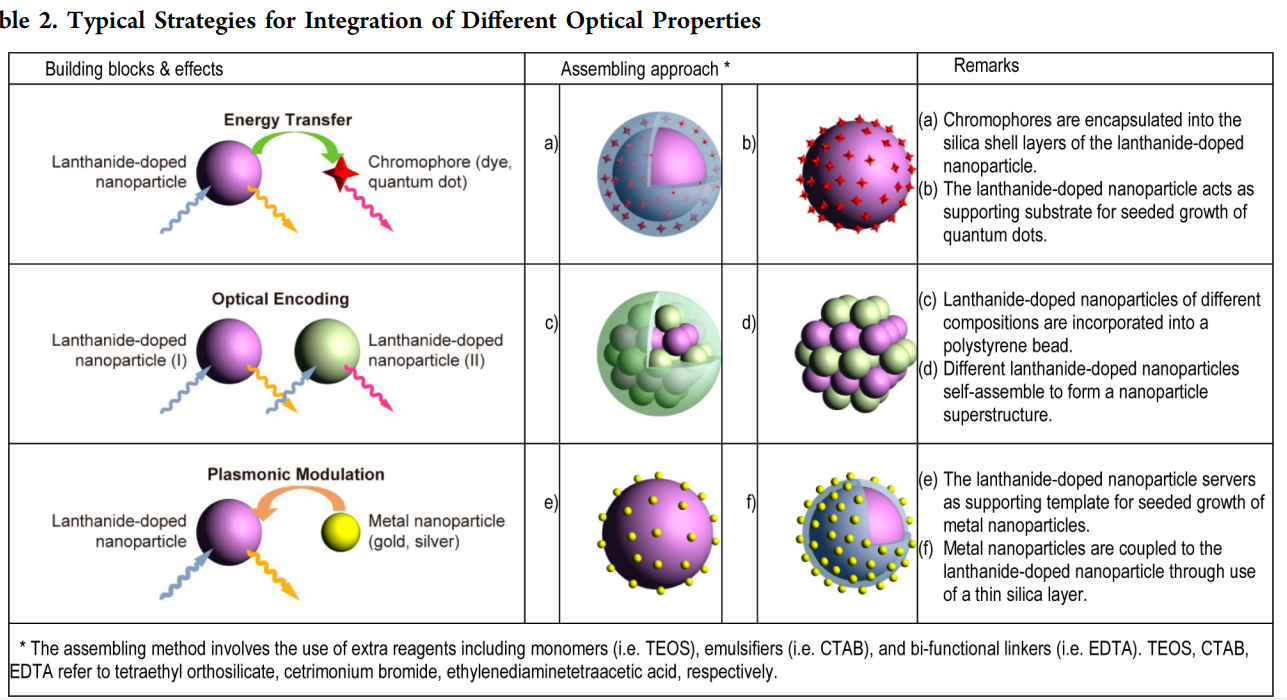 (a) In their work, NaYF4:Yb/Er nanoparticles served as platform for the growth of a mesoporous silica shell impregnated with either organic dyes or quantum dots. Upon excitation at 980 nm, the lanthanide activators give rise to upconverted emission that can be partially transferred to the guest optical entities encapsulated in the silica shell through Förster resonance energy transfer (FRET). Consequently, a dual emission with controllable intensity balance is achieved.
(b) CdSe-NaYF4:Yb/Er heterostructures that offer both sub-bandgap photoconductivity and tunable photoluminescence.
注：the emission of dye molecules and quantum dots can be completely attenuated owing to their substantially shorter lifetime (on the order of nanoseconds) than that of lanthanide ions (up to several milliseconds). 另外关于能量传递的机理，有人认为radiative reabsorption (second excitation) might also contribute to the energy transfer from the lanthanide ions to the dye molecules (or quantum dots) although it is generally believed that FRET mediates the optical interaction. (悬而未决)
(c) Lanthanide-doped nanoparticles for multicolor encoding: NaYF4:Yb/Er and NaYF4:Yb/Tm nanoparticles (∼25nm) encapsulated in polystyrene beads 聚苯乙烯微球 (Table 2c). By changing the molar ratio between the particles, the emission colors were deliberately tuned from green to blue.
(e) Metal nanoparticles in these nanocomposites typically do not emit light. Instead, they provide surface plasmons that could modify the local electromagnetic environment of lanthanide ions, potentially leading to the enhancement in luminescence emission of the lanthanides.
(f) Coating of silica-modified NaYF4:Yb/Er nanoparticles with gold nanoparticles (Table 2f). The authors found that the presence of gold nanoparticles strongly suppressed the emission of Er3+ at 540 nm.